Pathways of Desire: The ‘Rosewater Loop’. 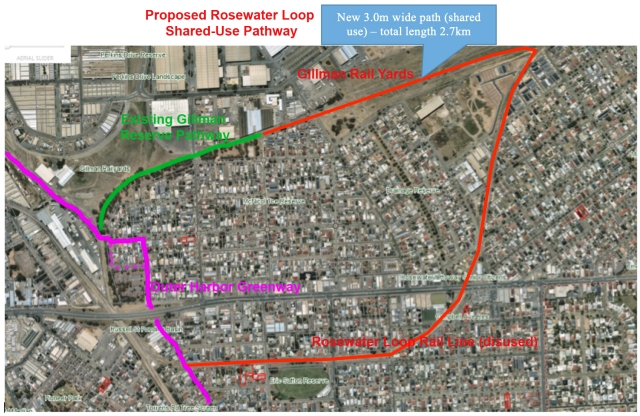 In April 2020 the Port Adelaide/Enfield Council announced plans to build a new shared-use path & bikeway – the Rosewater Loop – on an existing (now-disused) Rosewater rail reserve & via extension of the East-West Connector through Gillman Reserve along an existing informal pathway through what used to be the old marshalling yards & extending eastwards towards Eastern Parade (see above & below).

Both the paving of the informal Gillman pathway and creation of a Rosewater rail reserve pathway have been sought by PortBUG for nearly two decades. The Rosewater Loop Shared-Use Path brings these two projects together to form one continuous pathway through Rosewater & Ottoway. This pathway will provide thousands of ‘transport-isolated’ residents with much-needed walking, cycling & disability access to local shopping & service centres, to the Port CBD & to the Outer Harbor Greenway – likely to be of great value in our current uncertain times.

This project will build on informal or ‘made’ pathways established by community walking & cycling preferences – so-called ‘pathways of desire’!

‘Made’ pathways in the Gillman rail yard reserve.

For many years there have been clear signs that local residents have made regular use of informal pathways and access points on both of these routes (see above). These pathways represent evidence of people-movement independent of formal walking and cycling facilities – also sometimes called ‘made’ pathways or ‘pathways of desire’.

It is to PA/E Council’s credit that they have noted & responded to these obvious signs of informal use, need and local preferences!

In 2014 BUG Committee member (and town planner) Dave Case created an excellent photographic survey of the ‘made’ pathway extending from McNicol Trc towards Eastern Parade through the Gillman Shunting Yards (the northern section of the proposed Rosewater Loop) – check it out here.

As Dave said at the time…

“these images taken October 2014 clearly show ‘lines of desire’ where the unused rail corridor thwarts active travel between needed shopping destinations & homes within a community. It is all the more important that in vulnerable areas subjected to economic uncertainty… that active travel is enabled.”

The take-away for Councils & Planners?

Check out where people are walking & cycling already!