History of the OHG.

Origins:  Establishing a long distance, ‘low stress’ City-to-Port Bicycle Route – away from arterial roads & linked to the Outer Harbour rail corridor and local bike networks – has long been on the agenda of the Port Adelaide Bicycle User Group. Our focus on a Greenway between The Port and The City really started to come together with a way-finding ‘saddle survey’ we undertook in August 2005. We put together an illustrated proposal for a Port-City Green Travel Corridor or ‘GreenLink’. This was provided to the PA/E Council & to Patrick Conlon, the Transport Minister of the day in the Rann Labor Government. This proposal identified the route’s potential as well as some of the specific challenges involved.

With the Bicycle Institute of S.A. we recommended that this Port-City GreenLink route be incorporated into a broader Adelaide Greenway Network plan, with several suggestions for such routes. An initial Network Plan was published in SA’s 2006  ‘Safety in Numbers (2006-10)’ bicycle strategy. PortBUG’s  GreenLink proposal was also adopted as a major focus for the Port Adelaide/Enfield Council’s first Local Area Strategic Bicycle Plan (2008-12).

The Proposed Route:  The proposed route for the Outer Harbour Greenway – particularly between the City and Port Adelaide – followed the Outer Harbour rail reserve & PortBUG’s original 2005 recommendations. The route is not on the rail reserve itself but follows the rail alignment on nearby pathways, adjacent local roads & on public parklands where available. The PortBUG recommended this approach wherever possible to:

Funding:  In 2010 Premier Rann announced a four year funding package of $12M for a city-wide Greenway Project (2010-13) with initial work focussing on Greenways to the south of the CBD & to Glenelg.

In late 2012 the Dep’t for Planning, Transport & Infrastructure (DPTI) informed the BUG that the Outer Harbour Greenway would be ‘next on the list’ and indeed, its development started to take shape over 2013. Development since then has largely been the responsibility of DPTI with responsibility gradually devolving to the two Councils primarily involved – City of Charles Sturt and Port Adelaide/Enfield. Additional funding has subsequently also been provided as part of major projects at St Clair, Croydon (‘Torrens2Torrens’) and Bowden (‘Torrens Junction’ and the ‘Retort House Development’).

Rebuilding and resurfacing of existing pathways has occurred at several points including Alberton & Rosewater. Some ‘bike friendly’ Automatic Rail Crossings have been installed – these will facilitate bike access to the Greenway & also improve crossing safety for people using mobility devices & wheelchairs). Significant Greenway access has also been provided by the Renewal SA’s new ‘Harbour Loop’ pathway around the Port’s Inner Harbour & across the Birkenhead Bridge and by complementary pathways provided by PA/E Council along Semaphore Road.

The Greenway North of ‘The Port’:  In early 2017 additional works completed most of the Northern sections of the Outer Harbour Greenway (linking The Port to Outer Harbour) by providing off-road bike path linkages and signs to link local roads. New road crossings and signed Greenway links have also been provided through the waterfront precincts in the Port. 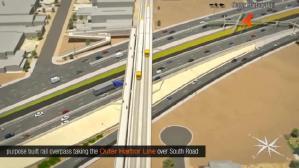 A New Overpass at South Road: At the City end of the OH Greenway the Torrens-to-Torrens project at South Road has provided a major new bikeway overpass and extended pathway extending through the Retort House Development to East Street. This overpass has been a major step in the completion of the Greenway as a continuous and effective cycling route.

Completion:  The last remaining section (about 150 metres of pathway between the new Chief Street Bridge and East Street) was completed in early September, 2019 with a community-driven ‘BikeFest’ held on 13th October to celebrate the event. The OHG was a complex project & took 14 years to complete. It involved the negotiation of:

Completion of the OH Greenway – made possible by the continued commitment & interest of:

2 Responses to History of the OHG.