Good news on the Port’s new Greenway! The BUG recently held an informal meeting with DPTI staff to discuss the linkage of the Outer Harbour Greenway into the Port CBD. We learned that construction of the Outer Harbour Greenway, one of the last stages of the Government’s four-year, $12M Greenway investment plan, is proceeding apace! Staff outlined several current and imminent activities including:

The Greenway adjacent to the new St Clair Rail Station

While there remains a great deal to do, DPTI staff anticipate that the route may be open as far as Port Adelaide in about 6 months. While the arterial road crossings may be open sooner that that, work will need to be completed on the off-road bike path sections at Bowden, Woodville and adjacent to the new rail station at St Clair. 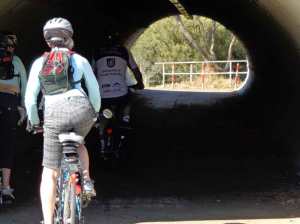 There will also need to be considerable input from Charles Sturt and Port Adelaide/Enfield Councils, particularly with regard to improving cycling conditions at the Red Hill Tunnel (under Grand Junction Road), through the Railyard Bikepaths and on Lipson Street. Both Councils have stated a strong commitment to the Greenway project and the BUG will be active in liaising with them regarding its further development.

One of many local residents likely to use the new Greenway.

The BUG had been invited by DPTI to advise on the route connecting the Buller Terrace section of the Greenway to the Port CBD. We conducted a survey ride on Sunday 7th April and will publish our findings here shortly on the Greenway page. We were particularly concerned to record issues of personal security, potential hazards around vehicle traffic and the navigation tasks and safety issues likely to be faced by unfamiliar or less able Greenway users (including children, tourists and older folk or people with disabilities). We spoke to many of these points in our meeting.

The BUG will continue to work with DPTI to ensure that the Greenway is constructed on the best route available and to an optimal standard. When it opens later this year it will not of course be ‘finished’ and we anticipate need for considerable further work, particularly on issues such as lighting, emergency services, phones, toilet facilities, bike parking, linkages to local bike networks and the many opportunities for installation of cultural, environmental and historic interpretation (including sculpture and other artistic work). We will encourage Councils to undertake extensive promotion of the Greenway to local communities, and in particular, to local traders to ensure that they are aware of the enhanced economic opportunities likely to come their way!

Look for some exciting Greenway-related updates at this blog over the next few months!