The Port Adelaide Council has substantially completed repair and remodelling work at the junction of Semaphore and Military Roads. Council officers indicate that this completes the Council’s final commitment to the redevelopment of Semaphore’s main street. The BUG notes some continuing disquiet amongst traders, visitors and locals with regard to a number of issues, including rapidly degrading paving in some sections of Semaphore Road, a lack of shade befitting the main thoroughfare, lack of appropriate street furniture, inadequate bicycle parking in some sections and a general lack of space, amenity and public safety for increasingly popular outdoor dining. 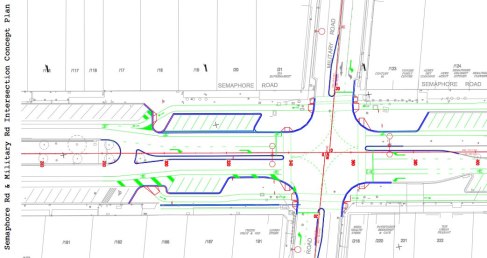 The South Australian Government last week announced that work has now commenced on a new rail station to service the needs of St Clair and the nearby community, as part of the government’s investment in the Outer Harbor rail line.

“Construction is expected to be completed by late September providing more public transport options and improved facilities for the growing community at St Clair and for nearby residents,” Mr Koutsantonis said.

More information is available from the Department of Planning, Transport and Infrastructure’s ‘Rail Revitalisation’ website at http://www.dpti.sa.gov.au/rr.

Note: The PortBUG continues to actively work with DPTI and Council to advance the completion of the Outer Harbour Greenway by the end of 2013..

The South Australian Government last week called on the community to provide feedback to help inform the development of an integrated transport plan, which Planning Minister John Rau said should reflect the requirements of all citizens.

Earlier this year, the government announced that it had secured $2 million of Federal funding to develop an Integrated Transport and Land Use Strategy for South Australia, which aims to provide a future vision of land use and transport across the state.

“We have developed a detailed online survey that provides a simple platform for people to give their own views on a wide range of transport and land use issues,” Mr Rau said.

“This is something I know a lot of people are extremely passionate about and everyone must have a chance to influence such an important strategy for South Australia.”

According to the government, the online survey asks South Australians to consider key issues of sustainability, liveability and prosperity, while also providing an opportunity to focus on specifics such as public transport, pedestrian movements and land use planning.

The government expects to produce a draft Integrated Transport and Land Use Strategy in September. The draft strategy will then be considered by the South Australian Cabinet for release to the public before its expected finalisation by the end of the year.

The survey is available from the Department of Planning, Transport and Infrastructure website at http://www.dpti.sa.gov.au/planning/Integrated_Transport_and_Land_Use_Strategy

Note: The PortBUG is preparing a contribution for a BISA submission to the Strategy.

4. Consultations for completion of the Coast Park at Tennyson.

PortBUG members are participating in consultations for completion of a final and very special section of the Coast Park adjacent to the remnant dune area at Tennyson. Comments and contributions are most welcome – please comment below or contact the BUG through the web site address.