An Easter Bike Update from PortBUG 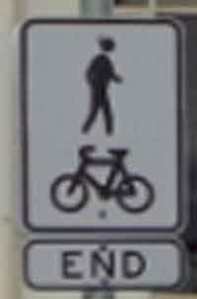 1. Coastal Way Closure: The closure to cycling of the Coastal Way adjacent to the Palais at Semaphore is now into its second year! For over 12 months Council signs have instructed bicycle users to dismount and walk through the section of the extremely popular pathway between the Palais restaurant and function centre on one side and the Centre’s ‘deck’ built out over the dunes on the other. The BUG believes this closure is unsatisfactory on all counts.

The problem is described as an OH&S hazard for the Palais staff who face potential collision with bicycle users on the pathway. The BUG notes that since the pathway was established the Palais has extensively enclosed what used to be an open, outdoor terrace, with the result that sight-lines are interrupted and patrons, staff and pathway users cannot readily see eachother as they approach possible

collision points! So whose problem is it really? This is the question that has taxed us as we’ve awaited a promised solution from the PA/E Council over the past 12 months.

We are now told that solutions have been proposed but have yet to be discussed with all stakeholders. We understand that information on proposals to resolve the situation will be available soon. We wait with bated breath! (Photos: Dave Case)

2. New Greenway Possibility for Ottoway? The PortBUG was recently contacted by the Ottoway Network, a group of local residents striving to improve their local environment in the suburbs immediately to the east of the Port along the northern side of

Grand Junction Road. Running from the old Rosewater Rail Yards adjacent to Lipson street, the Rosewater rail reserve extends eastwards to merge with the now vacant Finsbury Rail Line reserve near Eastern Parade, Ottoway. The Finsbury Line originally ran north from the Outer Harbour Line (near Port Road) through Cheltenham, Pennington and Angle Park, across Grand Junction Road and through Ottoway to join up with the line running west from Dry Creek which still extends out to the marshaling yards out along the Port River.

Although now partially built over, much of the Finsbury Reserve remains as a stretch of vacant land several 100 metres long and about 50 metres wide. The local community has proposed to both the State Government and the PA/E Council that it be transformed, along with the adjoining Rosewater Line rail reserve, into a parkway. Development possibilities include sporting and play grounds, grassed areas, wet lands, a dog park and most importantly (from the BUG’s viewpoint) an opportunity for a joined-up shared-use pathway allowing bicycle users to ride safely and securely as far as the shops and services in Port Adelaide and the new Outer Harbour Greenway!

What we have in fact is an opportunity for a new Greenway paralleling Grand Junction Road and joining these otherwise isolated (from a cycling p.o.v) suburbs directly to the Port and the City-to-Outer Harbour route (click map for details)!

This is an exciting possibility which your BUG intends working on with the Ottoway Network! For more information please go to the Ottoway Network’s web site at: http://www.ottoway.info/bulletin.htm  The Network is seeking signatures, particularly those of local residents for a petition calling for government investment in this local Parkway. The petition can be signed here.

3. Harbour ‘Hike & Bike’ Loop: The BUG has a few concerns regarding the ongoing development of the Port’s new ‘Hike & Bike’ Harbour front pathway.

While we are very pleased to see new developments such as the recent and unheralded linkage down to the Semaphore/Causeway Road junction (and the possibility of joining up with Semaphore Road’s off–road pathways) – see above – we have some lingering concerns about bridge access for cyclists not using the pathways, access from the loop into the Port CBD and similar issues.

We will be taking these up with the Port Renewal Authority at the earliest opportunity. The BUG is also developing a Cycling Issues map of the Port which will we hope will illustrate these concerns. We plan to have it on our web site soon!

4. Agenda 2014: The PortBUG is developing a comprehensive agenda of issues for 2014. We plan to use this agenda to actively campaign over the coming year and as a basis for discussions with both PA/E Council and State Government. Again, we’ll get it up onto the website for community comment asap. In the meantime, if you have bicycle related issues – please let us know via email or the website.

Happy Easter from the PortBUG!