1.  Coming – A New Port Adelaide/Enfield Bike Strategy:  The BUG was recently represented at a ‘stakeholder’s’ meeting to replace the now out-of-date 2008-12 PA/E  Bike Strategy. Opportunity for input has been limited but the PortBUG has made some initial written recommendations re. main road bike lanes, better bicycle access to the Port CBD and improved off-road and ‘Greenway’ routes.

We understand that a new draft strategy will soon be available for public scrutiny and input via the Port Adelaide/Enfield Council web site with an on-line form. We will let readers know when this is available. This review is important – it will guide the new Council’s work on it’s bike network over the next few years so we strongly encourage all PA/E residents – particularly those from Ottoway, the Parks and suburbs to the East – to provide suggestions to the project. 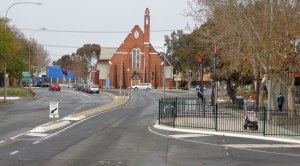 2.  Nelson Street Crossing:  As part of it’s new Inner Harbour ‘hike and bike loop’, Renewal SA has upgraded the road crossing on Nelson Street. This crossing is an integral part of both the Harbour Loop Pathway and the new Outer Harbour Greenway. Unfortunately, while there are new enlarged pedestrian ‘standing platforms’ where those crossing can wait for a break in the traffic, the project did not improve the already narrow mid-road or median ‘refuge’ where people are also often forced to wait for traffic to pass. 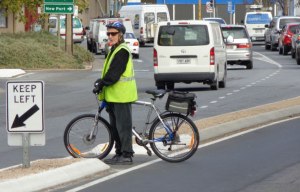 In the BUG’s view this narrow median refuge remains inadequate with limited standing room, no protective rails and no obvious signs alerting drivers to the crossing’s presence. There is barely room for a small family to stand in the refuge and   certainly none to safely accommodate  pushers, bikes or electric mobility vehicles. 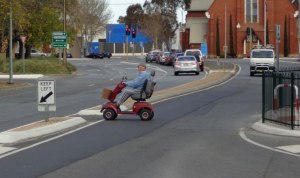 From a cycling and walking point of view the remodelled crossing remains unsafe. It also seems quite out-of-step with the quite thoughtful design of the rest of the Hike & Bike Loop. Even though the weather is still chilly we are already seeing large numbers of pedestrians, families, bicycle users and mobility vehicles using the Loop Path for recreational purposes and as a safer route to the Port CBD. Motor vehicle traffic in the area is also frequent and busy and will inevitably increase with warmer weather as more visitors come down to the Port. 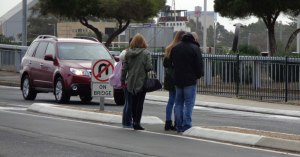 The BUG believes a crossing at this point should ensure both safe separation between vehicles and vulnerable road users, and visibility of those crossing the road for drivers approaching from St Vincent’s Street or descending (sometimes at speed) from the bridge ramp. We don’t believe the current design accomplishes this! 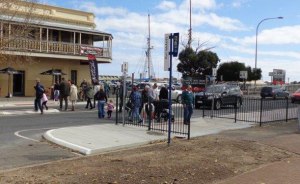 Over the last week the BUG has observed numerous instances in which those crossing were forced to crowd into the tiny refuge while waiting for traffic to clear. Indeed, on the weekends the situation frequently approaches chaos with many drivers clearly unable to effectively ‘read’ the situation and traffic frequently coming to a standstill and banking up as those waiting swarm across. It seems inevitable that as the Loop pathways become more popular and with weekend crowds visiting the Port over summer the situation can only get worse! The BUG will ask both DPTI and Renewal SA to review the design of the crossing as a matter of urgency.

Lot’s more pics of the Nelson Street crossing and the Loop Pathways here.

3.  Torrens-to-Torrens Project on South Road:  The BUG recently attended a meeting with the Torrens-to-Torrens project team. While one of our main agenda items was to ensure that the project provides an effective means for bicycle users on the Outer Harbour Greenway to cross South Road (on the proposed rail overpass), we also found a number of other opportunities for comment. We have now provided the project with a written submission which can be read here.

4.  Holland Street Bridge Re-Opens!  The City of Charles Sturt has recently announced the re-opening of Thebarton’s restored Holland Street Bridge as a bicycle and pedestrian crossing over the River Torrens. Bicycle users are invited to the official opening on the corner of Manton & Adam Street, Hindmarsh on Saturday 13 September 2014, 11.00am – 1.00pm. Please RSVP your attendance to Sally on 8408 1397 or email spallett@charlessturt.sa.gov.au Turn up and show your support for new bicycle infrastructure! 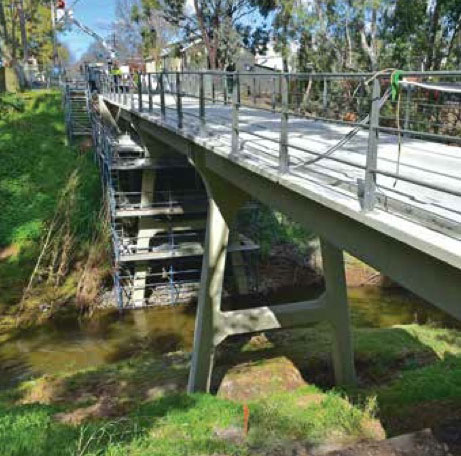 The restored structure will provide a pleasant and secure link between Hindmarsh and the Linear Path Greenway, the Adelaide CBD and Port Road’s shops and services. Paul Anderson from the Charles Sturt BUG says “I’ve been campaigning for years over this, and now it is upon us!! Turn up for a celebratory ride across this significant bridge…”.