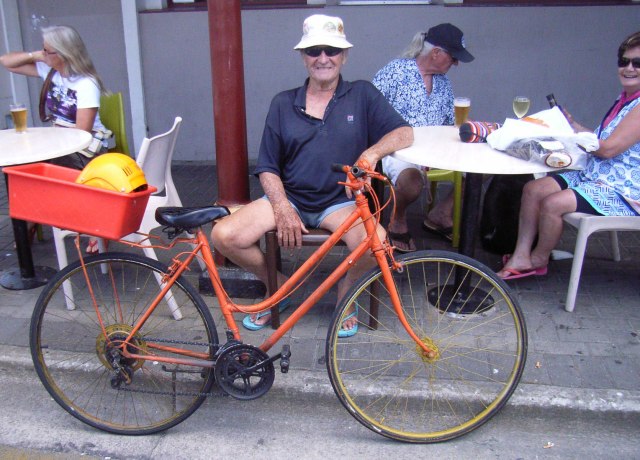 Semaphore Road Bicycle Philosopher ‘Bill’ with his ‘hard rubbish Special’:
“I’ve got 8 more! There should be more stuff for bikes! Guess which came first – cars or bikes?”

1. Every-Day Bicycle Users at the Semaphore Road Fair:  As many will know, (most) roads were not built for cars! And this certainly applies to our favourite main-street at Semaphore! In amongst the fairy dresses and bric-a-brac at this year’s Semaphore Road Street Fair there were a few compelling every-day cycling treasures encountered.

We found ‘Bill’ – a well-practiced cycling philosopher – proudly seated outside the pub with his orange Hard-Rubbish Special. Bill reminded us of the question so popular amongst the hipster crowd – ‘how many bikes does a person need?’ Bill obviously already knows the answer ‘N + 1’ as he has 8 more hard-rubbish machines at home and it sounds as though the collection is growing! When introduced to the PortBUG he proclaimed firmly to all present, ‘There should be more of it. Guess which came first – cars or bikes?’  We’re with you there Bill!

Corin, Simon & child (she’s the one seated on the Wee-Ride).
The small-wheeler belonged to Corin’s father. The large wheeler is an ancient Malvern Star. Nice people and beautiful bikes!

Further along the road we encountered Corin, Simon and Wee-One, proudly wheeling their own much-loved ‘rescued’ bikes. There’s something especially positive about bikes that just keep on going and going and going – and the people who love and respect them! 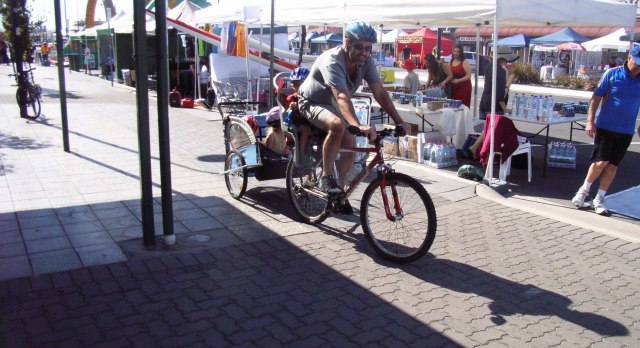 Then there was Kevin, out for a Street Fair cruise with the family on board – one child on the rear rack seat, two in the trailer, and plenty of water to go around!  Speaking of Semaphore Road’s unique and hard-won bicycle facilities, Kevin indicated that the off-road bikeways in particular “have made all the difference to our family’s bicycle use”! That’s what they are there for Kevin – everyday bicycle users – and that’s also why the PortBUG has now been around for nearly 30 years – because Bikes Deserve a Better Deal! Click on the ‘Follow’ button on the BUG’s home page to support better bike use in and around The Port!

2. New Railyard Pathway Ramp Confirmed:  DPTI – our State Government transport authority – has confirmed for the PortBUG that the much-improved pathway through the old Port Adelaide Railyard Reserve (Lipson Street, Port Adelaide to Edith Street, Rosewater) will also include a new and much wider (and hopefully ‘gentler’) ramp at the Edith Street end.

Location of the proposed Edith Street ramp on the Port Railways Bikeway.

Many bicycle users (including your Editor) have come to grief at this spot and we’ve been advocating for change for some time now. It’s great to hear that we can expect major improvement over the next week or so!

3. PortBUG Website Changes:  The PortBUG website is undergoing lots of changes as we try to make it easier to navigate and more interesting and relevant to all. One thing you’ll see quite soon is a new ‘Correspondence’ page where you’ll be able to read letters sent and received, particularly those that come from the Minister for Transport’s office. In fact we’ve received three letters from Minister Mullighan in the last fortnight so keep an eye peeled! If you have comments on the site or constructive feedback please let us know.

Come along to our Special Christmas Meeting – Thursday December 4th (this week!), 6.30 for 7pm, up the stairs at the Port’s Argo Greek Cafe, Commercial Road (opposite the Council Chambers!)

Shall we fly or shall we ride our bicycles…?