1.  SheRIDES Confidence-Building Program:  Ladies – like to become a more confident and informed rider? Consider signing up for CyclingSA’s SheRIDES Program.  “She Rides is a 6- 8 week structured riding and skills program that teaches women to discover their confidence and the joy of riding. For fitness to make friends for FREEDOM!” More details of SheRIDES program dates & locations here.

2.  Outer Harbor Greenway ‘Opening’ a Step (or Two) Closer! When exactly is a bike path ‘open’? It’s an interesting question that many of us have pondered for a few years. The OHG between Port Adelaide and the City has been increasingly rideable and useful for a couple of years now, as key bits of infrastructure – notably the South Road overpass and the underpass at Park Trc – have been opened.

Some significant diversions around ever-present road works and pathway (re)building have remained, notably at McInerney Park, Cheltenham and the Gasworks Retort House site at Bowden (see below).

We’ve recently been advised that not only is the pathway through McInerney Park at Cheltenham now open again, very soon the 150 metre section of brand new pathway through the Retort House site will be completed (apparently by the end of September).

A week or so ago commuter Gemma Kernich reported:  “I had a quick peek on my way home. Concrete ramp and path at city end is finished, lights all up, subgrade all ready for bitumen for remainder of path. The stomemasons are still working on old siding/retaining wall, lots of reuse of stone and wall repairs, and there was some fancy recycled brick capping also going in at city end return/wall. It’s going to look schmik I reckon.” 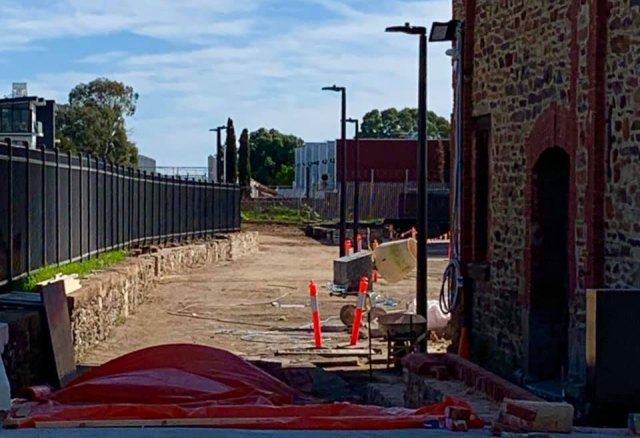 DPTI have assured PortBUG that this new section of the OHG is now ready for new paving and will be completed and open for use by the Bike Fest Greenway Celebration & Film Screening event planned for Sunday October 13th (see previous blog post).

3. May Terrace Rail Crossing:  For a year or so the PortBUG has been negotiating new bike facilities to be incorporated in the new Rosewater Local Area Traffic Plan (LATP). A key facility in this has been the creation of a formal bike & pedestrian crossing over the otherwise inaccessible fenced-off Rosewater rail reserve at May Terrace.

Gravel piled on the rail line at May Trc, preparing for completion of the new crossing. Photo: Debra d’Avigdor

This crossing will replace an ‘informal’ crossing (ie; holes snipped through the fences) and allow residents of Ottoway and cyclists on Grand Junction Road to access the local street cycling network through Rosewater North to the Outer Harbour Greenway and thence into the Port Adelaide CBD. PortBUG is negotiating a similar formalised rail crossing further to the east at Railway Trc, Ottoway to allow similar access to the (currently informal) pathways through the Gilman railyard reserve and thence to the Port CBD.