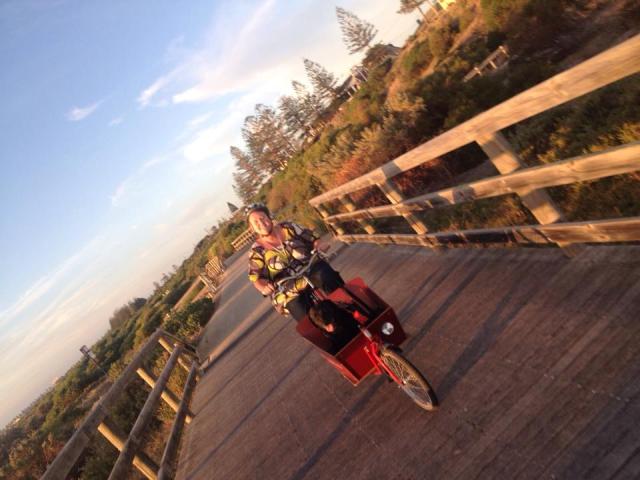 1.  Bakfiets on the Bikeway:  Largs Bay resident Mary-Clare has sent a great photo, taken on the Coastal Way which we just had to share with you. It’s obviously one of those over-the-shoulder pics that captures the joy of ‘just goin’ for a ride’. Marie-Clare bought her beautiful red Dutch-made bakfiets (‘box-bike’) locally and it get’s regular use, taking her pampered canine family members on outings. But only one at a time she reports as they are yet to learn to to share that cosy front box! 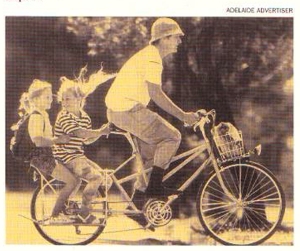 Of course the Bakfiets design is just one of many different forms of ‘cargo bike’. Others include Adelaide’s own original Longbike (see pic to right), developed in the late ’70s and 1980s and featured on its own page elsewhere at this site. At the PortBUG we’re great fans of ‘carrying stuff’ on bikes. If readers use any form of cargo or freight bike on Port Adelaide/Enfield bike routes the BUG would love to feature them. Just send us a picture and a few details!

2.  Greenway Updates:  DPTI Engineer, Namal Weerasooriya recently contacted the PortBUG with welcome news of removal of a key obstacle and significant hazard on the Outer Harbour Greenway at Fussell Place, Alberton. Namal said “…the light pole which was on middle of the shared path near Fussell Place has been removed and path has been reinstated.”

The Alberton Station bikeway ramp with obstacle in place!

Namal kindly attached a photo (see above) illustrating the now unobstructed entrance to the upgraded Greenway path running through to Alberton Railway Station and Railway Place. Contrast this with the view (to the right) of the same spot taken some months ago on a BUG recce ride! The BUG congratulates DPTI on the attention they are paying to such issues along the Greenway and for responding to the need to continue to ‘fine tune’ the route!

Other truly excellent news regarding the Outer Harbour Greenway comes via Gemma Kernich, Acting Manager of the Office of Cycling & Walking and DPTI’s ‘I Bike, I Like’ Facebook page.  The DPTI page says; “the Outer Harbor Greenway’s new path at Woodville Station has just opened for use! It’s 4m wide and well lit with just a little bit of tidying up to finish the work. You can now ride between Woodville Road through St Clair to Cheltenham Road, off-road.” 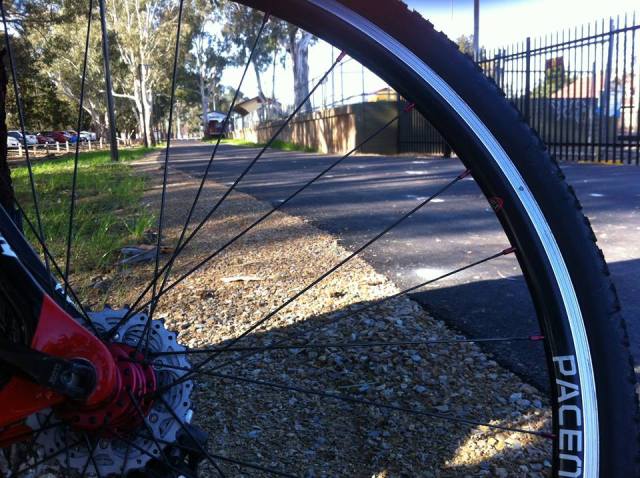 The O/H Greenway’s new section of shared-use pathway at Woodville/St Clair. Pic courtesy of DPTI, ‘I Bike, I Like’.

The PortBUG first surveyed and documented the Outer Harbour Greenway route back in 2005! On that first recce ride we noted the possibilities for routing the bikeway along this section of unused reserve adjacent to Woodville Station. We are heartened to see that DPTI too have considered this a great opportunity avoid sending bicycle users onto the often congested and poorly lit Glenys Nunn Drive! Great for walking &skateboarding too!

3.  Australian Walking & Cycling Conference: Registrations are now open for the 2015 conference. From the conference’s web site: “Walkers and bicycle riders share many similar issues, both need good places to walk and ride, and both are often at risk in our society, primarily from motorised traffic. We are all walkers in one form or another, babies, toddlers, school children, young adults and onwards. It has been said that if the world was designed for walkers, it would be good for everyone (except perhaps those who wish to drive fast cars). With this in mind, the Australian Cycling Conference will celebrate its sixth iteration by expanding to cover walking as well as cycling.”

4.  St Vincent Street Bike Lanes:  In our last blog post the breaking story was news of new bike lanes and crossing facilities being installed on St Vincent Street, Port Adelaide. The PortBUG subsequently wrote to DPTI requesting that the project consider options for reducing hazards that bike users face when turning right from St Vincent Street in Nelson, a manoeuvre required to cross the Birkenhead Bridge, either on the roadway or via the off-road shared-use path. The BUG considers this a major safety issue, particularly for commuting cyclists returning home to Penninsula suburbs late in the day when the setting sun often presents particular difficulties for drivers behind them, negotiating what is a relatively complex set of turning lanes. In particular we asked that DPTI consider inclusion of a ‘hook turn’ facility (similar to that illustrated below) in the current project. 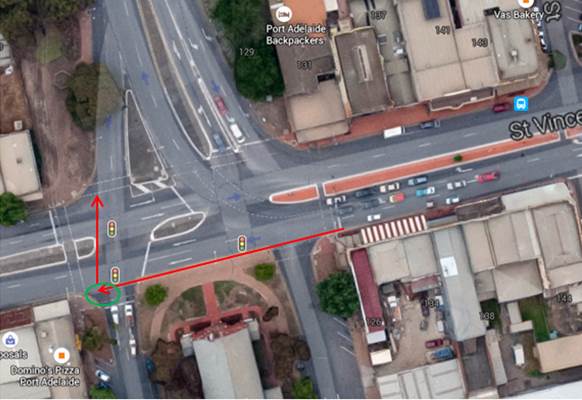 DPTI Project Manager Bill Zissopoulos has very promptly responded as follows; “Thank you for the email and detailed response – greatly appreciated.  Good to hear that you are supportive of this new initiative of adding bicycle lanes with the double buffer on St Vincent Street between Jervois Bridge and Nelson Street. What you are proposing [re the hook-turn; Ed] sounds like a great idea and has merit.  Unfortunately I can’t add it to this current work, however we are currently investigating options that you have recommended as a project in the 15/16 financial year. Once we have developed a concept, we will send a copy for your comment to ensure that we have encapsulated your suggestions.”  The PortBUG is encouraged by DPTI’s response and looks forward to further work on this important (and hazardous) section of the Port’s bicycle network in 2015/16 financial year. We would also welcome any input about this issue from readers

June ‘Pic of the Month’!

Helpful signage from City Of Charles Sturt workers on the Gawler Greenway route. Courtesy of DPTI’s ‘I Bike, I Like’.