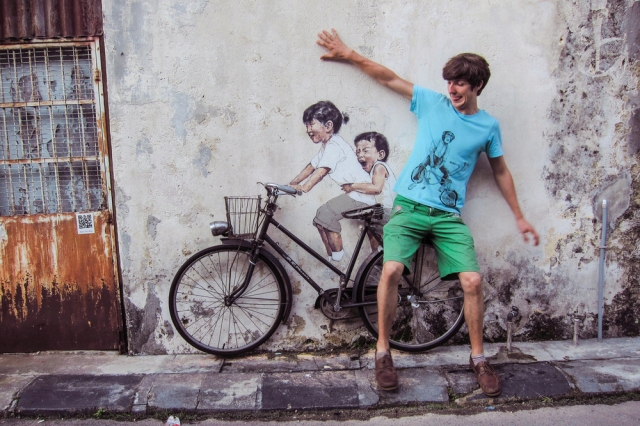 Last month’s blog pic with artist Ernest Zacharevic along for the ride. Click for more of Ernest’s work.

Epic Ride Completed – Semaphore, Tibet & Beyond: Local Semaphore resident Fin Walsh has returned from an epic bike adventure across SE Asia, riding from Hanoi in Vietnam all the way to India, Nepal and the Himalayas. With many, many adventures along the way! He’s written up his amazing trip from Hanoi to the Himalayas in tantalising detail . Check it out here.

New Bike Plan for Port Adelaide: At it’s December meeting the Port Adelaide/Enfield Council ratified its new 2015-2020 Bike Plan. PortBUG has been working with the Council and its consultants on the plan for the past year or so. The final draft can be seen here – we’ll post the signed-off copy asap. The PortBUG has recommended several priorities for the Plan’s first year of implementation in 2016. We’ll list these asap at an updated Bike Plan page at our website. As well as the bike plan, the Council has also supported creation of a bike repair station on the foreshore at Semaphore and adjacent to the Coastal Way.

PortBUG Meets with City of Charles Sturt: The PortBUG recently met with Bryan Ruhle, Traffic Engineer, City of Charles Sturt. In the temporary absence of a local bicycle user group within CCS, PortBUG has agreed to provide some consultative input to a number of bike-related initiatives CCS are undertaking, including 40km/h speed zones, a new draft bike plan and new bike infrastructure on the Greenway. Bryan also informed us that the unlit section of off-road path at St Clair, between Cheltenham Parade and Woodville Road, will shortly get new lighting courtesy of CCS. Hooray!

Future Cycling – Aukland Shows the Way: Aukland, New Zealand, has opened an incredible dedicated pink coloured raised bicycle freeway. Described as a ‘bike path with real Mana’ (that’s NZ for soul) the pathway circles around Aukland Harbour and then the CBD with numerous access points and some amazing Maori-inspired art work and motifs built into the surface. Check it out here. And watch the mind-blowing video of hundreds of bicycle users celebrating the path’s opening day. And the aerial photos! This is a great example of the imaginative thinking and initiative that so many car-dominated Australasian cities desperately need!

the New Year & the Holiday Season