1. Port Adelaide/Enfield Bike Network: Detailed & ‘expandable’ pdf maps of the proposed PA/E Bike Network & its new initiatives are now available at the PortBUG website. The Plan has been endorsed by Council and can be seen here. The PortBUG has written to Council with recommendations for a ‘Year 1’ of the Plan’s implementation (for which a limited budget will be available).

2. Bicycle Safety – Old Port Road: The junction of Old Port Road & Port Road at Alberton has been a major concern for some years due to the complexity of traffic movements where the city-bound lanes merge & the lack of provision for safe bicycle use. This concern has grown with DPTI’s recent installation of bike lanes along the complete length of Old Port Road to further define its use as a bike route!

At PortBUG’s recommendation, DPTI have now installed a ‘cut through’ bicycle access point between the city-bound lanes of Old Port & Port Roads. This will enable bicycle users to avoid the hazardous merging zone where the two roadways meet.

Cyclists can simply ‘exit-left’ & leave the Old Port Road lane, cross the median reserve via a short pathway & wait safely at a standing rail at the Port Road end for a break in traffic before crossing Port Road & joining the bike lane.

Clear sight-lines for all & a standing rail for bicycle users.

We’re quite pleased with this outcome. Sight-lines appear effective & both bicycle users and motorists have clear views of eachother. We have some concerns about the presence of commercial driveways immediately opposite the exit but feel this simply requires a normal level of attention from cyclists. PortBUG believes that this new facility is an excellent example of the ‘ground level’ sort of improvements that make a big difference for safer & more attractive every-day bicycle use! 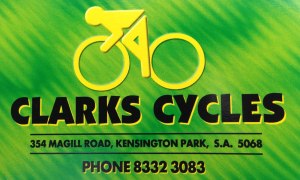 3. Clark’s Cycles Close:  It’s the end of an era – Clark’s Cycles on Magill Road has closed after 38 years as one of Adelaide’s commuting bike specialists. ‘Clarky’ has been a well-known provider of sensible bikes at sensible prices with great back-up from his rather humble and sometimes slightly chaotic premises under the big green and yellow sign. Kevin was for many years Adelaide’s agent for the excellent & highly popular Shogun all-purpose bikes, & then for the full range of Gazelle ‘fully equipped’ European, retro-style and electric velos in later times. He was also well known for building many 16” & 20” wheels for PedalPrix racers over the years & for providing unusual-sized tyres, particularly from the excellent & near puncture-proof range of Schwalbe city and touring rubber. Although officially closed Kevin has lots of stock still for sale with some great deals (including some excellent Zefal pumps!) You can contact Clarks at 8332 3083. Kevin’s candid bike-advice & competent repair services will be missed by Adelaide’s ‘every-day’ bicycle users.

4. BUG Website Updates: Our web manager has embarked on redevelopment & enhancement of our PortBUG website as an up-to-date source of information:

The web site is a work in progress & is intended to act as a community resource for everyday bicycle use, making it easier and more convenient. If you have suggestions – please, let’s hear them!