PortBUG recently met with the Port Dock rail station Project Team to discuss key issues for cycling and Active Transport. Ours was their first discussion with the community – more general consultation will occur in the next few weeks. Here’s a summary of what we said: 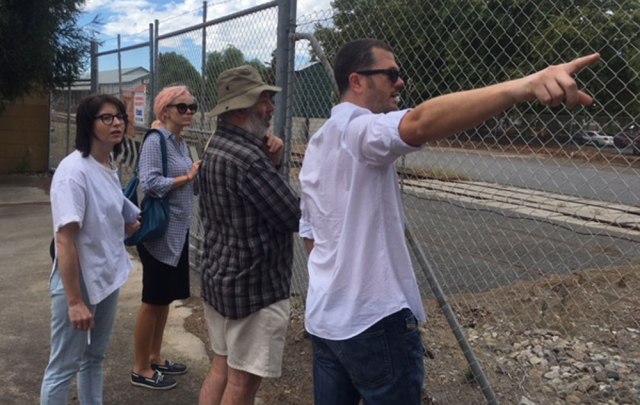 “1.  Greenway Continuity:  It is essential that continuity be maintained along the Gillman rail yards section of the Greenway. We note that there is significantly more at stake in this continuity than connectivity for bicycle users. The rail yards pathway is used extensively each day by residents of Rosewater and other nearby suburbs to walk, cycle or travel by mobility device into the Port CBD to access shopping and services. It is already important and highly functional public space and should be valued as such.

Gillman Rail Yards: The Greenway looking north. The new spur line will run on the rails to the left (which will also be fenced off).

We suggest that the crossing across the new spur line be maintained and improved to the highest standard possible. Given the wide range of pathway users and the high likelihood of significantly increased traffic once the Outer Harbour Greenway is fully open in the next month or so, we’d suggest that the minimum standard that should be considered is an ‘automatic’ crossing of the type already installed at Woodville Rail Station.

We also discussed the need for provision of effective interim access along the Greenway over the course of the project. This access needs to be continuous and at all times as direct as possible through to Lipson St, although we acknowledge that its location may need to shift at the different stages of construction. It will of course also need to be disability compliant and secure with regard to lighting, surface treatments and ramp ways etc.

2.  Rail Station Access:  It will be essential that pedestrians, bicycle users and those using mobility devices using the Greenway also have as direct access as possible to the new Port Dock rail station. This access will be particularly valuable for residents of Rosewater and Ottoway for whom the new station may well be more accessible than the existing raised Port Adelaide station.

We understand that Port Adelaide/Enfield Council is considering options for an off-road or kerb side separated shared-use pathway along Barlow St (where there is currently no footpath). We would suggest that the Project Team liaise with Council to ensure that an effective linkage is provided from the Gillman Rail Yard Greenway pathway to any such new shared-use facility. We anticipate that such access may require improved pathway surfaces, separation, lighting and signage through the rail yards to connect to Barlow Street.

3.  Lipson St:  The Greenway’s route along Lipson Street remains a real challenge as it must accommodate (for the time being) frequent use by semi-trailers, police vehicles, Greenway users, visitors to the local museums as well as the likelihood of increased bus traffic. We believe that there is already considerable potential for conflict and risk to vulnerable road users (cyclists and pedestrians). Given the likelihood that the new station will result in increased traffic (and potential for conflicts) on Lipson Street we would suggest that the Project Team will need to work closely with Council to minimise any increased risks for vulnerable road users.

Trucks and buses are a frequent presence on the Lipson Street section of the Greenway!

We have already suggested a number of pre-emptive strategies to Council aimed at reducing this risk including:

We also note that concurrent with the development of the new rail station, Starfish Developments will commence construction of a new housing development at Dock 1 on the waterfront. Many of the new station’s potential customers will inevitably be located here and at the new public service offices located on Nelson St to the west. We therefore anticipate need for much improved access for both pedestrians and bicycles through the waterfront precinct and across the often very busy St Vincent Street. We believe that Council and the developers will need to work closely with the Project Team to ensure that this improved access is provided.”

The Project Team expect general community consultations to commence in the next few weeks. We’ll try to keep track of this let let you know of opportunities for input as they arise.