Readers may have noted in a recent PortBUG post that DPTI were – until recently – considering the installation of a ‘Dutch-style’ roundabout at the junction of Hart and Carlisle streets as part of their redevelopment of Hart St, Semaphore. Unfortunately the new roundabout did not go ahead due to a lack of funding.

However two Dutch-style roundabouts are being built in St Kilda, Melbourne. This design separates cyclists from traffic and gives them the same status as pedestrians – which requires that cars give way to them where the bike-paths cross the entry roads. BISA was recently told that something similar has in fact been built by the Council in Mildura where separated paths allow cyclists to traverse each quadrant of the roundabout, separated from traffic. 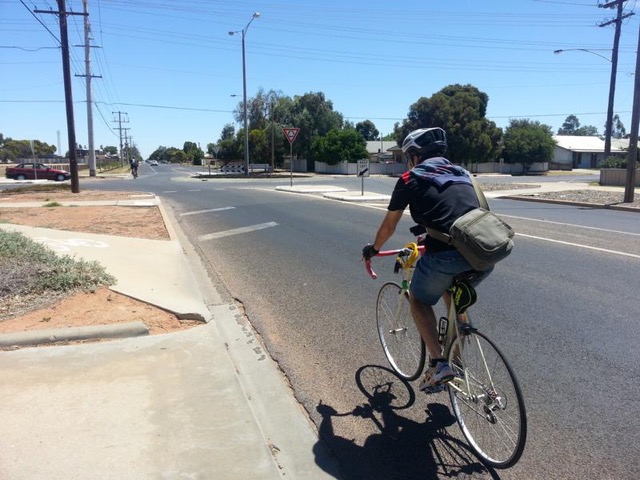 …and entering the quadrant pathway.

It appears that the Mildura example caters for cyclists riding on the road and appears to lack the more prominent/raised pedestrian crossing which appears in the Saint Kilda (and presumably the Dutch) version. While it was disappointing that the Hart Street project did not go ahead, it’s been interesting to subsequently discover that DPTI have actually designed and built others, notably at Bolivar Road, Paralowie. 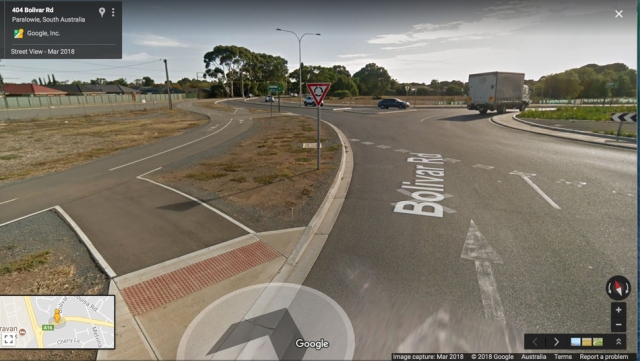 Ramp and entrance on the left giving access to off-road pathway.

Birds-eye view of the Bolivar intersection showing off-road pathways, ramp entrances from the roads and crossings.

It appears that this new roundabout at Bolivar is linked to new off-road bike paths as well. Let’s hope that DPTI can keep experimenting with this design and start to retrofit the concept to exisiting roundabouts across the metro area as has been done in St Kilda!