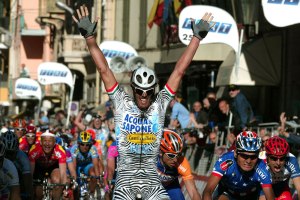 ‘Super Mario’ does the Zebra!

1. PortBUG & the Tour Down Under: On January 15th, 2019 the first stage of the Tour Down Under will be finishing in St Vincent Street, Port Adelaide. The Finish will be accompanied by a Street Party & Festival. PortBUG will be partnering with the PA/E Council to provide concierge services for a secure bike-parking area for visitors & to encourage them to arrive via the Outer Harbor Greenway and other bike routes. Please consider coming by bike and making use of the secure bike parking area. You may even get a selfie with Tour legend Mario Cipollini– ‘Super Mario’ – arguably the most entertaining cyclist in professional cycling’s recent decades. Cipollini will be coming to race in the Challenge Tour on the 19th. It’ll be a great day and a great week! 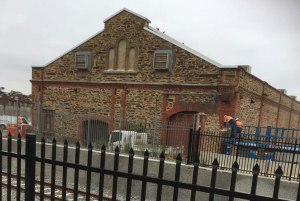 2. Greenway Closer to Completion: Port Adelaide’s own 13km direct secure bike route into the Adelaide CBD is a step closer to completion with DPTI starting work starting on the penultimate bit of bikeway between the new bike-bridge over Chief Street in Bowden and the Bowden Station precinct at East Street. What’s new? ‘The Wall’ that extends across the bikeway route behind the heritage Gasworks Retort House is at last being dismantled stone-by-stone. There are still quite a few steps to go but we reckon we can expect work to proceed apace & look forward to the path’s completion in the New Year!

3. Bike of the Month!  Spotted on Semaphore Road, Anneka and her two children on their amazing Taga. Is it a trike? Or is it a stroller? Or maybe a shopping trolley? Who knows – we just think it’s great! In Anneka’s words, “best investment we ever made!”

4. Outer Harbor Greenway Detour: While work proceeds on new housing around the Bowden gasworks sites, new detours between Gibson and Chief Streets have been announced, effective until February 2019. The map below seems more or less self-explanatory! We’re assured that the detours will be effectively signposted…

5. New Bike Lanes – Hart Street & Port Road:  Work has started on the new roadway line markings and bike lanes on Hart Street, Semaphore and Port Road, Queenstown. Both these initiatives will provide ‘full time’ bike lanes (physically separated on Hart Street) with ‘buffer’ lanes to protect bicycle users from ‘dooring’! These are significant steps forward in making The Port a safer and more attractive environment for Active Transport users! We’ll be out and about taking a few snaps for our next blog post in January!

6.  A New Beginning for PA/E ‘Bike Planning’! The current PA/E Local Area Bike Plan will ‘run out’ in 2020. PortBUG has been talking to the Council about how we can complete the current Plan and tackle development of a new, post-2020 strategy. We feel that there is a great deal still to be completed from the current plan and that any new bike strategy really needs to be a ‘step up’ in terms of:

Council have told us that after 2020 they want to establish an Integrated Transport Strategy that will consider bicycle use and Active Transport in the overall context of PA/E’s transport network. Hopefully this will turn out to be a good thing! We’re meeting with the Council’s CEO and senior staff tomorrow to discuss this along with some Key Issues & Recommendations. Stay tuned!

Best Wishes from the PortBUG for the Holiday Season!