Today PortBUG members took a brief reconnaissance road trip up to Gawler to check out the route of the Northern Connector (NC) Bikeway and try to figure out its potential connections to established bikeways and bike networks. Although there was no sign that construction of the NC Bikeway itself has started, DPTI have assured us that it will ‘connect directly’ to both the Dry Creek and Little Para Bikeways so we wanted to see how this might happen! We also wanted to better understand potential for connections at the Bolivar, Waterloo Corner and Port Wakefield Interchanges, the latter of course joining up with the existing Northern Expressway (NE) bike path. 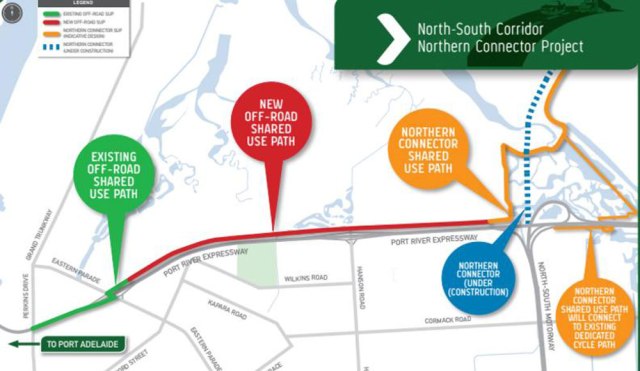 And we wanted to revisit the junction of the NC Bikeway with the proposed Port Expressway (PREXY) Bikeway and the Gawler Greenway route! Driving up the PREXY out of Port Adelaide we were able to observe the ‘haul road’ on the left which – we are told – is where the PREXY Bikeway will be built once the NC is finished.

At the NC/South Road Junction the PREXY Bikeway bumps around to the north for a bit and under the new NC roadway before returning to join the NC Bikeway on the eastern side. From this point riders can head either to the north or south. North along the future NC Bikeway and south – apparently through a rather dodgy looking culvert – and via the wetlands to join the Gawler Greenway route (heading either into the City or back north to Mawson Lakes). 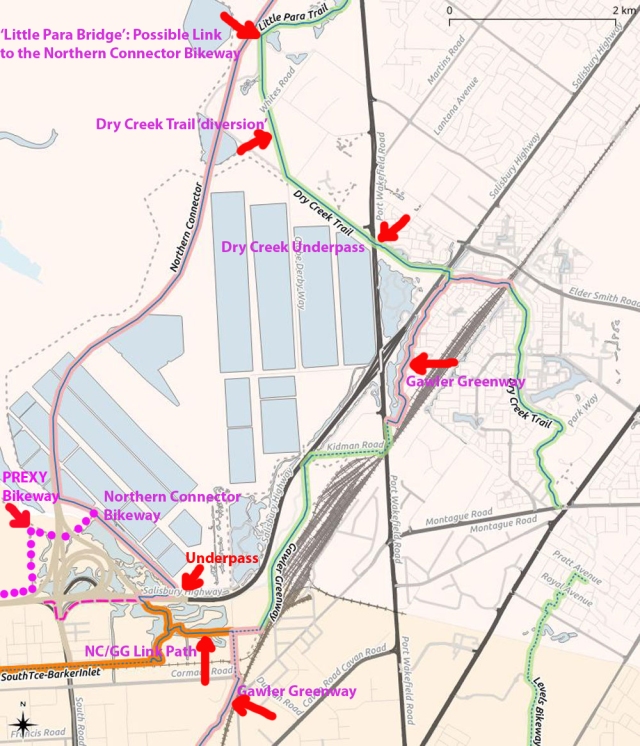 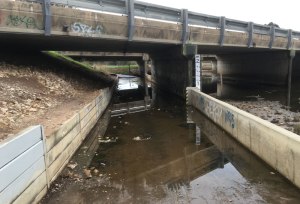 From the PREXY we joined the Port Wakefield Road, turning left past the salt fields to inspect the Dry Creek Trail underpass. We had a quick look at this notoriously ‘wet’ underpass and confirmed that – as is so often reported – the one-way drainage valve and pump aren’t doing their job well.

There was a lot of marine detritus, gravel and lumps of rock on the pathway as well as around 100mm of slimy water. Riding through it all would be fun on fat tyres but for those on narrower tread  – definitely a hazard! 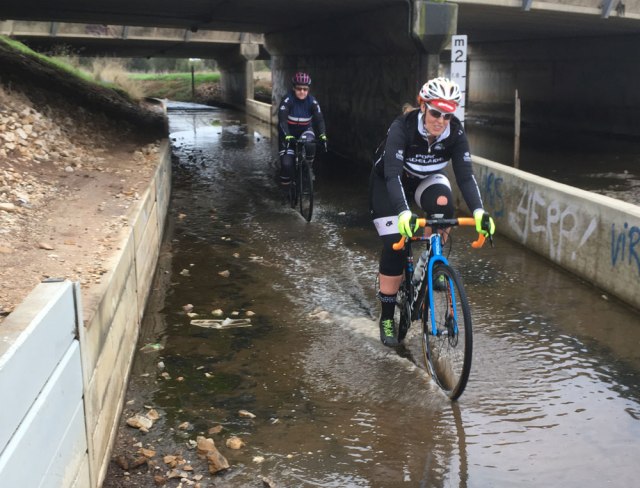 Continuing on behind Globe Derby Pk to the White’s Road Wetlands, a quick walk brought us to the junction of the Dry Creek Trail ‘diversion’ and the Little Para Trail coming in from the NE adjacent to a gated bridge. 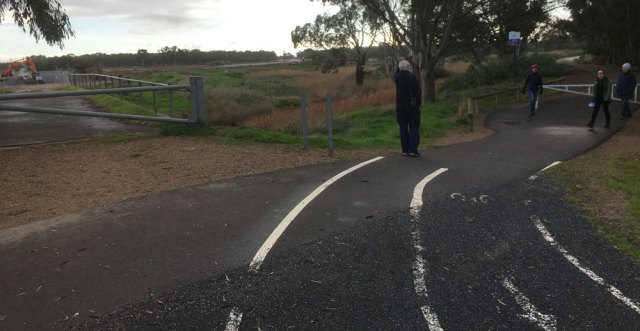 Little Para Trail on the right & possible NC link via the gated bridge.

This gated bridge across the Little Para Creek is only a 100 metres or so from the Northern Connector route. This bridge – we presume – is the point at which DPTI will join everything up – maybe the ‘Little Para Interchange’? 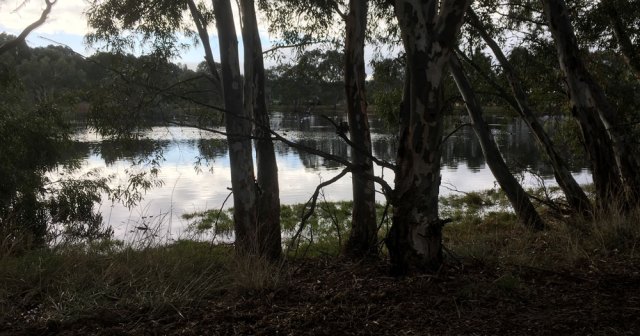 Incidentally the White’s Road Wetlands are very special and worth visiting – very serene (despite the machinery in the background) and lots of birdlife.

Interchanges on the Northern Connector Route.

We rejoined Pt Wakefield Road and headed North, checking out potential bike network linkages at the Bolivar, Waterloo Corner and Port Wakefield Interchanges. Quite how linkages to the NC Bikeway at these points might be achieved remains unclear but we’ll be suggesting to DPTI that they be considered. At Bolivar we also had a look at one of SA’s few ‘Dutch Roundabouts’, inspecting the the separated paths and crossings up close! 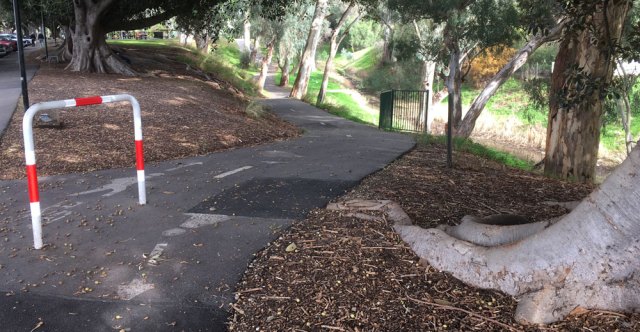 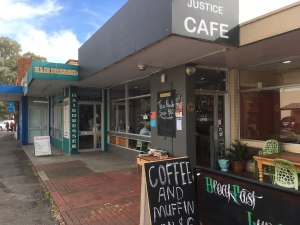 Following the route of the Northern Expressway Bikeway we ended up in Gawler and had a quick look at its nicely designed bike and pedestrian infrastructure before an early lunch at the really excellent ‘Poetic Justice Cafe’ in the main street (‘recommended cycling tucker’).

Conclusion: There’s a lot of exciting stuff happening at this northern end of Adelaide’s Metro Bike Network, with potential to establish some very useful commuting and recreational links – congratulations to DPTI for making it all happen. We’re told that most of these proposed new bikeways are funded (so will eventually be built) apart from the Gawler Greenway from Dry Creek onwards. For commuters the Gawler Greenway seems a bit more direct (if less picturesque) bike route into the City than the Northern Connector. We need to make our voices heard to ensure it gets funded and then built! 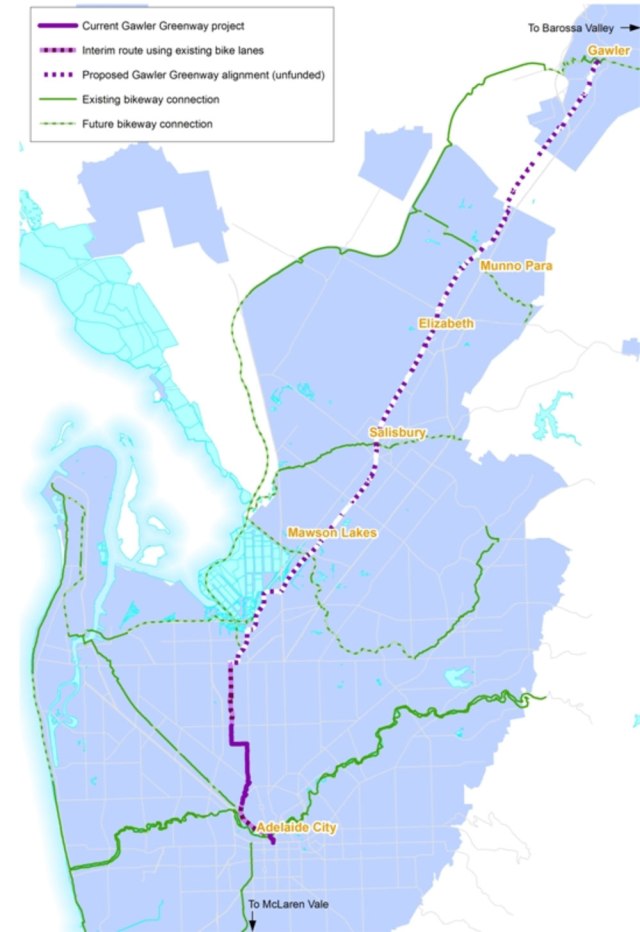