“With a basket on the front of her bicycle and two daughters and school bags weighing down the back, Melissa Derwent cops “surprised looks” as she pedals up and down the steep hills of suburban Oatley to school drop off before starting her commute. There is no Lycra in sight.”

“There is no bike infrastructure in the suburbs, and you definitely stand out. You are not a middle-aged man in Lycra. You are the mum on a bike version of a minivan, or the nearly middle-aged mother not in Lycra,” Ms Derwent, 37, said.

As policy makers grapple with how to reduce the pressure on public transport during the COVID-19 pandemic, a study by the City of Sydney… found many women didn’t ride or walk because of the absence of dedicated walking or cycling paths. Women also feared for their personal safety and wanted better street lighting, and said they wanted end-of-trip facilities to change so they didn’t arrive at work sweaty or with “helmet hair”…

The survey of nearly 900 women was conducted by the City of Sydney council with the global group C40 Women4Climate to address the barriers female walkers and cyclists faced… it recommends every street should be thought of as a “walking and cycling space” and calls for lower speed limits, and separated bike and walking paths.” 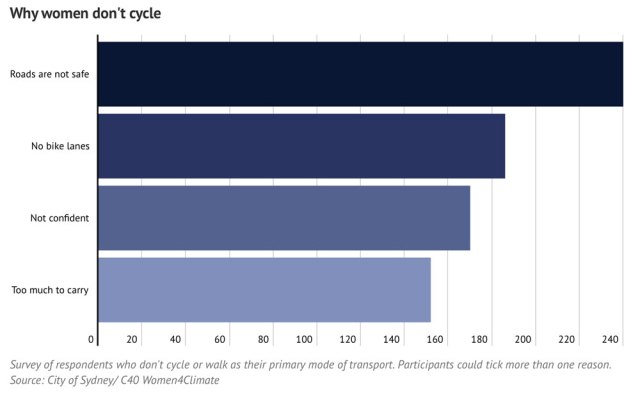 …the Amy Gillett Foundation also released results of a survey that found 90 per cent of Australians agreed more needed to be spent on temporary bike lanes.”

Stephen Hodge, the director of national advocacy WeRide, described women as the “canary in the coalmine” for cycling. “When the cycling environment is safe, convenient, attractive and direct, then women will choose to cycle for their short daily trips in large numbers,” he said. When they feel safe, they will encourage their children to cycle or walk to school.”

…More formal bike paths and lanes would make a huge difference because they would make you feel this is a safe space. You are very conscious of cars being bigger and stronger than you,” Ms Derwent said.