Premier Weatherill yesterday released the draft Integrated Transport & Land Use Plan for public comment. The plan can be found at www.transportplan.sa.gov.au. Comments via the on-line survey, in writing or email to transportplan@sa.gov.au. A range of public events will be held during October and November and online. Submissions close Friday November 29, 2013.

The BUG notes some key sections of the Plan related to bicycle use (emphasis is ours!): 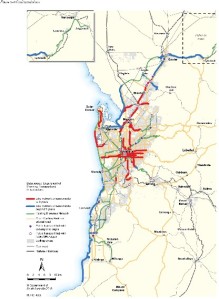 “We will invest in better facilities for walkers and cyclists at public transport stations, such as secure bike parking, lockers, bike sharing opportunities, signage and wayfinding…”

“Encouraging people to adopt cycling and walking for commuting and other transport purposes − as distinct from purely recreational reasons − is an important objective of our integrated transport planning.”

“…we will provide clear separation between cyclists/walkers and motor vehicles on arterial roads.”

“Growing concerns about the environmental sustainability of our transport and land use systems and the health of South Australians mean that…walking and cycling will play an increasingly important role in producing more liveable, sustainable and productive urban places.”

The PortBUG will put together a response to the plan on behalf of local communities and would welcome your comments below! 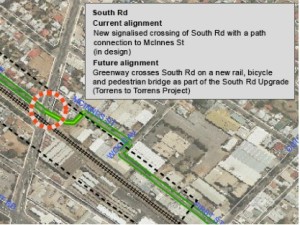 2.         Outer Harbour Greenway Update:         Gemma Kernich, A/Manager of DPTI’s Walking & Cycling unit has pointed the PtBUG to newly updated and much more detailed maps (actually annotated arial photographs) of the Outer Harbour Greenway. These can be seen at: http://www.infrastructure.sa.gov.au/infrastructure_projects/greenways_project/greenways_project/outer_harbor_greenway

Other Greenway updates mentioned include:

The web site also notes that Greenway will follow a new shared use path from Woodville Rd to Cheltenham Pde, currently under construction in three segments:

The PtBUG also understands that improvements to the bicycle & pedestrian tunnel under the Red Hill Bridge are also about to start, including improved access and safety features.