Work is nearing completion on the new shared-use pathways along Causeway Road at Semaphore and Ethelton. Causeway Road has long been a hazardous route for cyclists as well as pedestrians and users of mobility devices. It’s a designated heavy transport route and sees hundreds of trucks each day. It also hosts two busy rail stations, a pub, two schools and hundreds of residences in close proximity. It connects Bower Road to Semaphore Road and is therefore the most direct route around the western end of the Port River. Speed is set at 60km/h and vehicles often appear to exceed this. There are zero provisions for safe bicycle use on Causeway Road – no bike lanes, no warning signs and no forward-standing zones at the lights at either end. In other words there are major hazards along this route for vulnerable transport users. 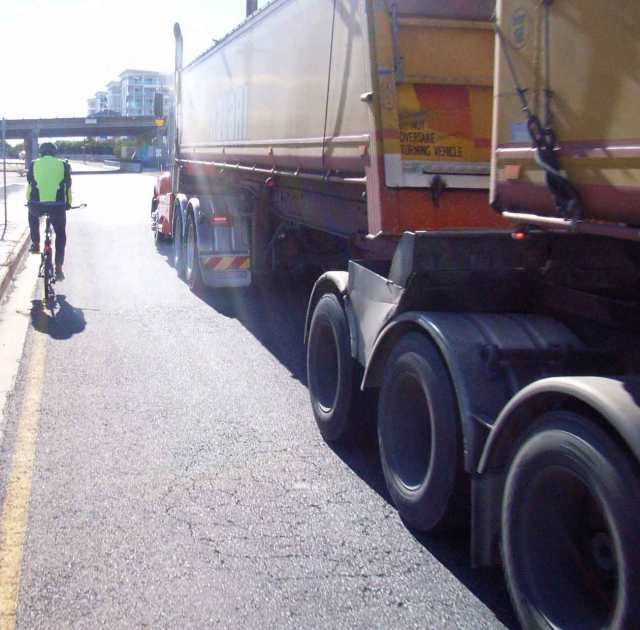 Scary eh!!! This picture of BUG member Dave Case on Causeway Road exemplifies the challenges the PortBUG has faced in trying to improve conditions for bicycle use. There is now at least an off-road option immediately to Dave’s left on the new shared-use pathway!

The new bikeways greatly improve the situation and may resolve many of these hazards. At the very least they will provide vulnerable road users with more options for security and connectivity!

The new Bikeway starts at the corner of Causeway and Semaphore Roads (where it connects to the Outer Harbour Greenway and the Semaphore Road Bikeways) and extends south along the eastern side of Causeway Road. 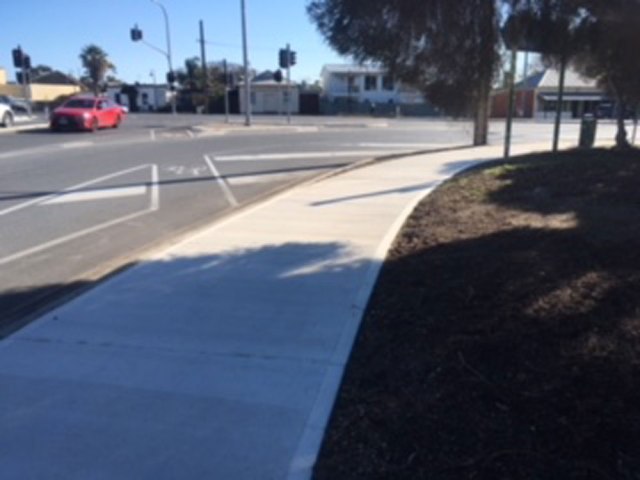 Start of the new pathway, looking north towards the corner of Semaphore Road. Connects with the Outer Harbour Greenway & Semaphore Road Bikeways.

The Bikeway runs past the entrances and exits of the bus interchange and Glanville Station car park with new, wide ramps… 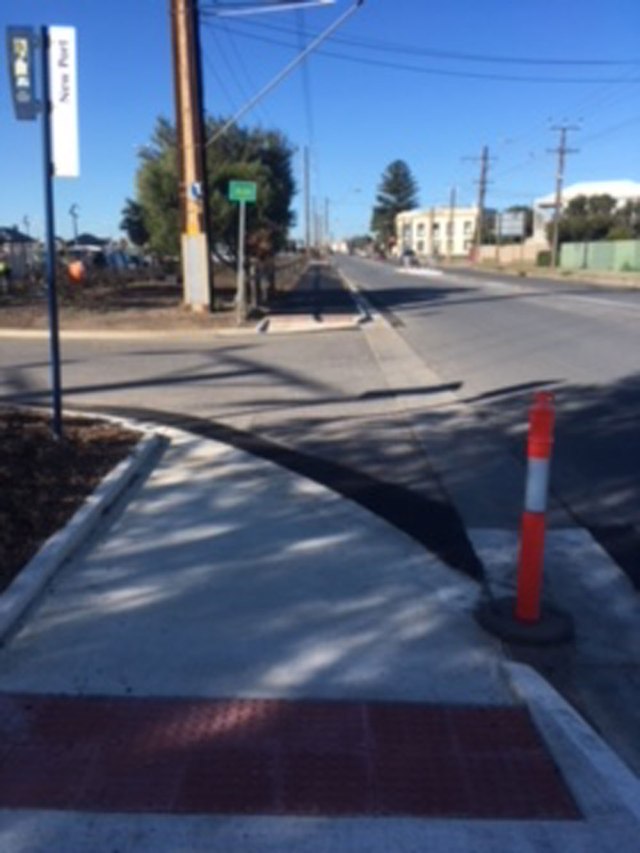 The new Glanville Crossing with Bridge Bikeway access ramps in the background and the start of the western-side bikeway heading south (under the Bridge).

This new crossing is ‘uncontrolled’ but has a nice wide median refuge with standing rails and wide ramps. New lights are not yet in place but the area looks as though it will be well lit at night. At this point the east-side pathway turns into dirt. Hopefully in the future it too may be improved! 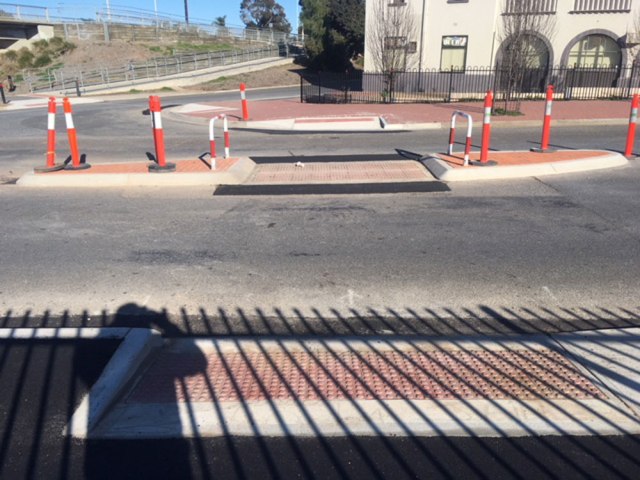 New crossing opposite the Glanville Pub. Wide ramps, median pedestrian refuge and the bases for new lights (out of the frame).

The western-side pathway extends southwards beyond the Bridge and along a new widened pathway in front of the Ethelton Rail Station car park towards Bower Road. 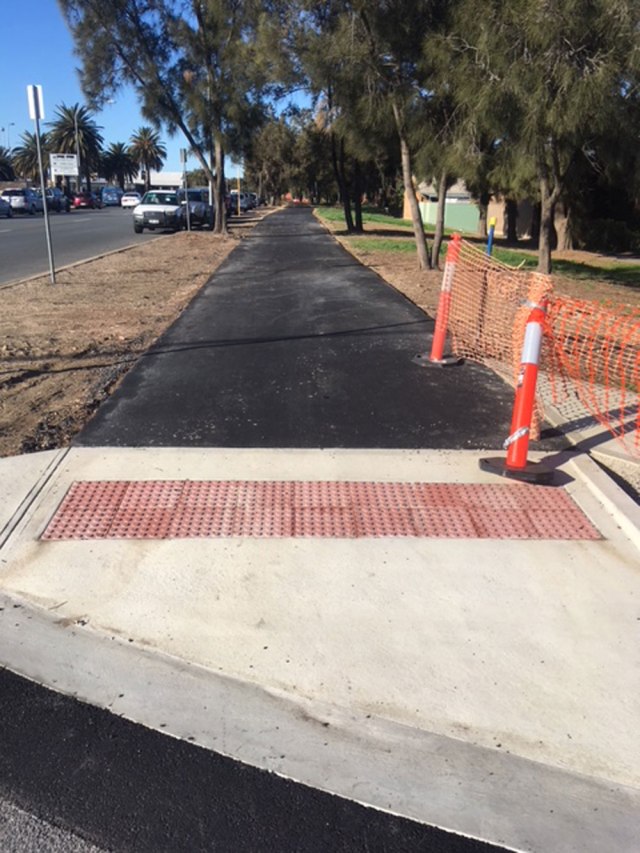 The new west-side pathway, looking south from the corner of Mary Street.

The pathway extends to the corner of Causeway and Bower Roads. A new ramp has been installed and it looks like the pathway will be joined up in the next day or so. The big question is whether the new design will provide direct access to this ramp (and the new path) from the button & light controlled-bike crossing on the other side of Bower Road.

This crossing was installed by DPTI a couple of decades ago but appears to be infrequently used by cyclists. It was originally designed for bicycle users intent on riding north on Causeway Road itself. With the new pathway cyclists now have a much safer off-road option! Time will tell if the concrete standing islands in the foreground below and the road markings will need modification to allow better access to the pathway! 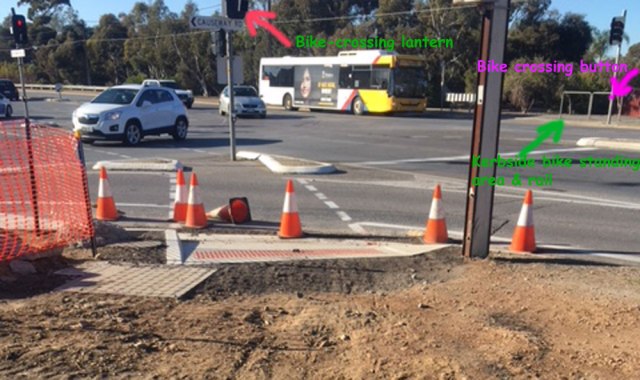 It looks like the new pathway will be finished and operational in the next week or so. Please try it out, let the PortBUG know what you think of it and we’ll pass on any suggestions you may have to Council!